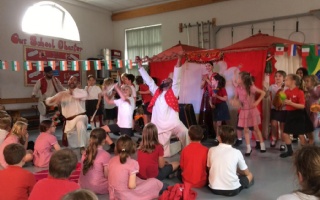 “These days it is rare to find a school hall magically transformed by a group of travelling players, bringing laughter, excitement, and food for thought. Surya’s Story does just this”.

Wimborne celebrates Fairtrade and The Rights of the Child with Surya Arts! On Friday 23rd June Surya Arts will be resident in St. John's CE First School and later on Wimborne Square thanks to the generous support of Councillor David Morgan via the  Ward Budget East Dorset Council.

Surya’s Story brings the issues of Fair Trade and the Rights of the Child to colourful and dramatic life. The play is about a young girl, Surya, who sews footballs in Northern India. We learn about how many children are exploited by the West’s desire for cheap products and food.

The theme of football offers a wonderful opportunity to engage an audience and make connections with human rights and environmental issues. Surya’s Story also helps young people to learn about the need for Fair Trading and the rights of child labourers.

The younger children will see Jazz and Jagdeep a story of a magical tea bag that flies all the way from London to Assam.

Pupils at St. John's CE First School will also take part in workshops in Bhangra dance, drumming, and drama and banner making. The day will end with a march around the school to promote the Rights of the Child and Fairtrade and to engage parents.