Around the World Week 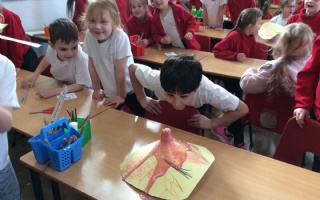 We had a great time during Around the World Week!  Please see the gallery for more photographs.

On Monday 8th March, we started zooming around the world and it all ended on Friday 12th March. Are you ready to hit the airport for a whole lot of fun and exciting trips?

First, Ecuador. Its name is from the Equator as it is very near the Equator. They have 42 volcanoes and only 7 are active!  For our activity, we made exploding volcanoes. We also decorated them and my team won the best design.

On the second day, we were learning about India. I made a rangoli pattern which I realised you had to be very skilled to do and very calm and careful! Bollywood films are made in India and it is very famous for its dancing.

On Thursday afternoon, we were in Japan. We made blossom tress that looked pretty and beautiful. We also wrote our names using the Japanese alphabet. We learnt about the Shibuya crossing which you only have a short amount of time to cross as the cars go when the time is over!

Finally, we went to Zimbabwe. We made cave drawings which was adventurous and exciting. It has the world's widest waterfall which drops straight down. We also learnt how to count to five in isiXhosa.

The best part was the exploding volcanoes! I also had fun doing the cave drawings which was very different. I had a lot of fun while learning new things. What an experience!